What do ’80s TV show Dallas and the Netherlands have in common? In a roundabout way, they are all responsible for inspiring Texas Tulips, a new cut-your-own flower field blooming soon near San Antonio.

Texas Tulips’ newest field is currently underway at 15122 FM 775 in La Vernia, about 30 miles west of downtown San Antonio. The operation allows patrons to stroll through massive rows of tulips and cut their own flowers from a field of thousands of blooms.

According to owner Pieter Koeman, Texas Tulips should open in mid-February 2020 and close in late March/early April, depending on the weather.

Texas Tulips, which has a similar operation in Pilot Point, near Dallas, is the latest endeavor from a family with a long floral history. Koeman grew up in the Netherlands, where his mother and father operated a ran an 80-acre tulip farm for more than 40 years.

After his father’s death in 2011, Koeman, finding inspiration from an unusual source, decided to move to Texas.

“The idea to open a tulip farm in Texas originally came from when I was young and was watching Dallas, the TV show, with my family. We always loved that show, and we were fascinated by Texas,” Koeman says. “When my dad passed away, we saw an opportunity to go to Texas and start a u-pick tulip farm there.”

In 2015, Koeman and his wife, Petra, opened the first Texas Tulips on a six-acre field in Pilot Point. The farm was a hit in North Texas and inspired the family to head south for its second outpost.

Like its North Texas farm, Texas Tulips’ La Vernia location will offer pick-your-own flowers from a field of thousands. For $5 entrance fee, visitors can select tulips from a variety of colors, all priced $2.50 per stem. Discounts for veterans, seniors, and students are also available. And, because this is the age of social media, and it doesn’t get more Instagrammable than a massive field of blooming tulips, the company also offers a day-long, $25 photographer package.

“We love spreading the joy of tulips to people, as it’s one of those simple pleasures of life,” Koeman says. “The tulip is such a happy flower and one of the first signs of spring.” 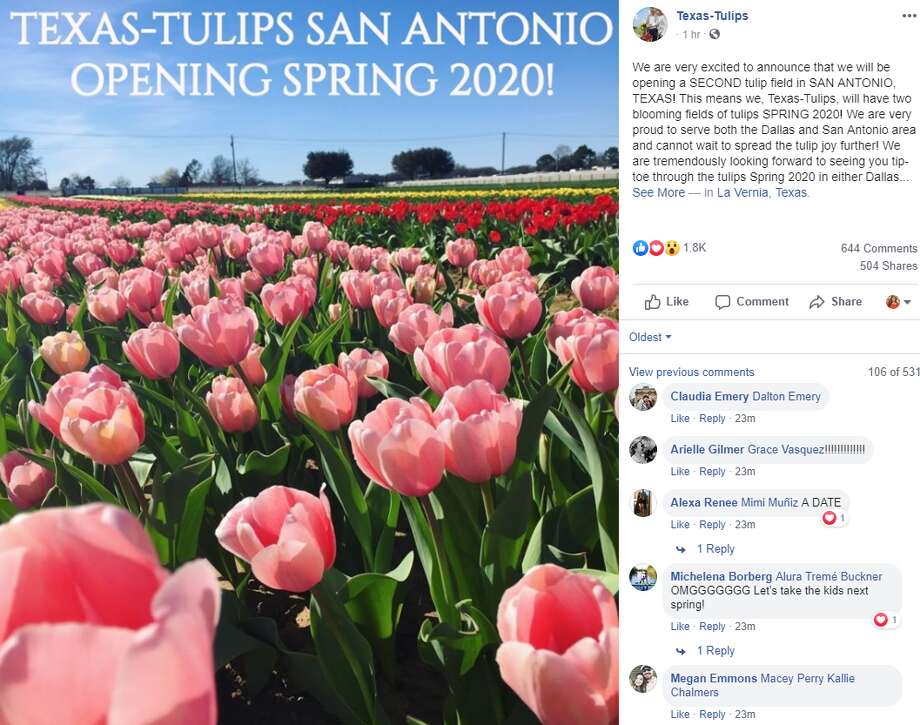 “San Antonians will no longer have to make a road trip to Dallas to see what Texas Tulips is all about. The “u-pick” tulip farm that has become a hit on social media for dates and Instagram photos is opening a second location, in the San Antonio area, Spring 2020, according to the company’s social media pages and website.”

The “u-pick” tulip farm that has become a hit on social media for dates and Instagram photos is opening a second location, in the San Antonio area, Spring 2020, according to the company’s social media pages and website.

“We are very proud to serve both the Dallas and San Antonio area and cannot wait to spread the tulip joy further,” the post reads. “We are tremendously looking forward to seeing you tip-toe through the tulips Spring 2020 in either Dallas, TX or San Antonio, TX or maybe even both!”

The Thursday afternoon announcement calls the new farm their “San Antonio, TX tulip field.” The address is listed as 15122 FM 775 in La Vernia.

Entrance fees are $5 per person and $2.50 per stem, according to current pricing on the website.

There is also space for picnics.

Fans online celebrated the news, tagging their dates or commenting about being anxious to go.

“Texas Tulips are opening up in SA and my heart is so happy,” Twitter user @jmedusa93 said.

LA VERNIA, Texas – A giant tulip field is coming to the San Antonio area in Spring of 2020.

U-Pick tulip field is opening a second location next year, in addition to the ever-popular tulip field near Dallas in Pilot Point.

Entry fees start at $5 per person and $2.50 for each individual tulip, which will come wrapped in paper with flower gel for the stems.

Discounts are available to veterans, seniors and students at $7.50 a person, which includes the entrance fee and three tulips.

Children 12 months and younger will be admitted for free to the tulip field.

For more information about the tulip farm, click here.